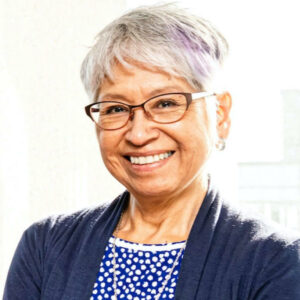 Stephanie J. Waterman, PhD, (she/her) Onondaga, Turtle Clan, Associate Professor at the Ontario Institute for Studies in Education/University of Toronto, in Leadership, Higher & Adult Education, coordinates the Student Development/Student Services in Higher Education stream. She is honored to work on the traditional lands of the Huron-Wendat, Seneca, and Mississaugas of the Credit. She is a mother, sister, auntie, and grandmother. Dr. Waterman researches Indigenous student experiences and associated support units and is currently using critical geography to do so. She is a co-editor with her colleagues Dr. Heather J. Shotton and Shelly C. Lowe of Beyond the Asterisk: Understanding Native Students in Higher Education (2013) and Beyond Access: Indigenizing Programs for Native Student Success (2018) (Stylus). She is currently working on an edited book with Dr. Charlotte Davidson tentatively titled Indigenous Practices in Higher Education Classrooms. Dr. Waterman had the honor to serve as co-editor with Dr. D-L Stewart on the 2020 Journal of College Student Development Special Issue on Race, Indigeneity & Relationship in Student Affairs and Higher Education. Dr. Waterman is in this profession to educate those who work with Indigenous students, and those who teach student and academic affairs personnel, about Indigenous students, so that our students will have fulfilling experiences that support their whole being. She firmly believes that this knowledge informs our work with all students and the academy. 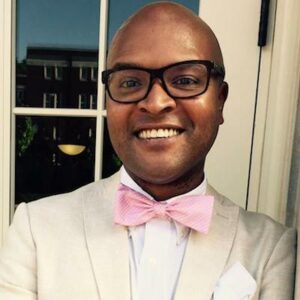 Dr. Steve D. Mobley, Jr., is a proud native of Washington, DC and has dedicated his life to enhancing the post-secondary educational experiences of underrepresented students.  He is currently an assistant professor of higher education administration at The University of Alabama in the department of Educational Leadership, Policy, and Technology Studies.  His scholarship focuses on the contemporary placement of Historically Black Colleges and Universities (HBCUs).  Particularly, Dr. Mobley, Jr.’s research underscores and highlights the understudied facets of HBCU communities including issues surrounding race, social class, and student sexuality.

Dr. Mobley, Jr. also has extensive experience in the field of higher education.  Most recently, he served as Associate Director of the undergraduate program at Georgetown University’s McDonough School of Business.  Prior to arriving at Georgetown, he held appointments in academic affairs at the University of Maryland and taught courses in The College of Education, Undergraduate Studies, and the Academic Achievement Programs (A TRiO Initiative).  He earned his B.A. in Communication & Culture from Howard University.  Upon graduating from Howard he completed his Master’s in Higher Education Management from the University of Pennsylvania, and earned his Ph.D. in Higher Education from the University of Maryland.

His scholarly work has also garnered national attention and commendation as he is a 2021-2023 College Student Educators International (ACPA) Emerging Scholar-Designee, 2019 ACPA Coalition on Men & Masculinities Tracy Davis Emerging Research Award, the 2019 ACPA Coalition of Sexuality and Gender Identities (CSGI) Research Recognition Award, and the 2018 Article of the Year Award from the American Educational Research Association’s (AERA) Queer Studies Special Interest Group (SIG).  Dr. Mobley, Jr. was also recognized with three national dissertation awards.  His dissertation, Difference Amongst Your Own: The Lived Experiences of Low-Income African-American Students and Their Encounters with Class within Elite Historically Black College (HBCU) Environments has received recognition from the American Association of Blacks in Higher Education (AABHE), the National Association of Diversity Officers in Higher Education (NADOHE) and the Southern Association for College Student Affairs (SACSA) respectively. 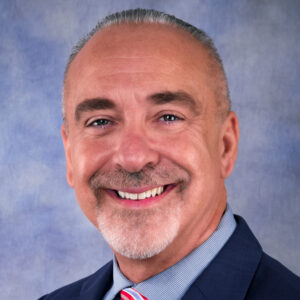 Dr. John C. Hernandez (he/him) was appointed President of Irvine Valley College (IVC) in July 2020. Reporting to the South Orange County Community College District Chancellor, his responsibilities include providing leadership in the development of a sustainable master plan; developing and monitoring the college budget and ensuring resources are allocated efficiently; supporting learning, teaching, and student success; ensuring optimum services are offered in all areas of student life; providing leadership in the development of a comprehensive enrollment management plan; and working with district and college administrators and leaders of the Academic and Classified Senates to establish and achieve institutional goals.

Dr. Hernandez previously served as President of Santiago Canyon College (SCC) from July 2017 to 2020. The year prior to his appointment, he served in the role on an interim basis. In both roles, he provided leadership in institutional planning, allocation of fiscal resources, human resources, facilities, and the delivery of educational programs and services to advance student learning and success.

From 2005 to 2016, Dr. Hernandez served as Vice President for Student Services at SCC, where he was an advocate for increasing opportunities for students and for partnering with others to provide a seamless delivery of support services. Additionally, since 2009 he had provided administrative leadership for SCC’s Foundation. In that role, he created the necessary infrastructure to ensure a sustainable foundation with an enhanced capacity.

Dr. Hernandez has been in the field of student affairs for 33 years, 20 of which were spent in administration. Prior to his tenure at SCC, Dr. Hernandez served in the following administrative roles: Associate Vice President and Dean of Students at Cal Poly Pomona, Associate Dean for Student Development at Santa Ana College, and Assistant Dean for Students Affairs at California State University, Fullerton. Additionally, he served as an adjunct instructor in the Student Development in Higher Education graduate program at California State University, Long Beach.

Over the years, Dr. Hernandez has served in various leadership roles within the American College Personnel Association (ACPA), a national professional association for student affairs educators. In 2015, he completed a three-year term on the Governing Board, representing senior student affairs officers and chairing the Senior Student Affairs Officer Advisory Board. Additionally, he has served on the faculty of ACPA’s Institute for Aspiring Senior Student Affairs Officers and the Donna M. Bourassa Mid-Level Management Institute.

Dr. Hernandez has published several journal articles, including “En Sus Voces (In Their Voices): Understanding the Retention of Latino/a College Students” in the Journal of College Student Development (2000); “Leaking Pipeline: Issues Impacting Latino/a College Student Retention,” co-authored with M. A. Lopez for the Journal of College Student Retention (2004); and “A qualitative exploration of the first year experience of Latino college students” for the NASPA Journal (2002). In 2014, he co-authored a chapter titled “The role of the executive-level student services officer within a community college organizational structure” in New Directions for Community Colleges (2014).

Throughout his career, Dr. Hernandez has been the recipient of several awards and honors, including as the inaugural recipient of the Cynthia S. Johnson Award for Mentoring from the Student Development in Higher Education Program at California State University, Long Beach; the Standing Committee Advocate Award from ACPA College Student Educators International; a Distinguished Alumnus honor from the California State University, Long Beach College of Education; an Apple of Gold Award from the Orange County Hispanic Education Endowment Fund (HEEF); and Outstanding Senior Student Affairs Officer from the NASPA Latino/a Knowledge Community.

Dr. Hernandez earned his PhD in college student personnel administration from the University of Maryland in College Park; a master’s degree in counseling with an emphasis in student development in higher education from Cal State Long Beach; a bachelor’s degree in sociology from Cal State Fullerton; and an Associate in Arts degree at Fullerton College.

As a first-generation immigrant and a product of the California community college system, Dr. Hernandez knows the impact of a college education firsthand. His educational journey was positively shaped as an EOP&S student at Fullerton College, and he is a living testament of how lives are transformed through education. 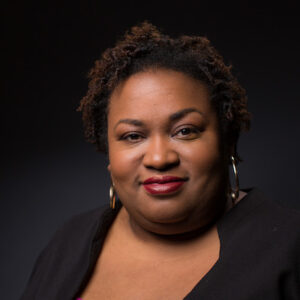 Dr. Brittney Cooper is co-editor of The Crunk Feminist Collection (The Feminist Press 2017). She is author of Beyond Respectability: The Intellectual Thought of Race Women (University of Illinois Press, May 2017) and Eloquent Rage: A Black Feminist Discovers Her Superpower(St. Martin’s, February 2018).  In particular, this work interrogates the manner in which public Black women have theorized racial identity and gender politics, and the methods they used to operationalize those theories for the uplift of Black communities. Along with work on black female public intellectuals, Dr. Cooper studies Black women’s organizations as sites for the production of intellectual thought. She has two forthcoming book chapters on the history of the Order of Eastern Star and the history of Black women’s fraternal and club activism in North Louisiana.

Using Black feminist thought to understand contemporary articulations of Black womanhood is Dr. Cooper’s other major research area. She has published several book chapters and articles on representations of Black women in popular culture, including a piece on the representation of the “baby-mama” figure in Hip Hop music and film, the feminist implications of Janet Jackson’s 2004 Super Bowl mishap, and the importance of Michelle Obama in the tradition of Black female leadership. She has a forthcoming article on Sapphire’s Push as a hip hop novel.

Dr. Cooper is co-founder along with Dr. Susana Morris of the Crunk Feminist Collective, a feminist of color scholar-activist group that runs a highly successful blog. Three members of the CFC were recently profiled in Essence Magazine’s list of Young, Black, and Amazing women under age 35 (August 2012 issue). The CFC blog was also named as one of the top 25 Black blogs to watch in 2012 by The Root.com and one of the top “Lady Blogs” by New York Magazine in November 2011. The Collective also does speaking tours, conducts workshops, and engages in a range of activist causes related to women’s issues. Professor Cooper blogs for the CFC as “Crunktastic.”

A native of Ruston, Louisiana, Dr. Cooper considers herself a small-town Southern girl at heart, which explains her affinity for soul food, crunk music, and warm weather.

Roommate matching for #ACPA22 is now open! We are proud to partner with @RoomSync to provide a matching service for ACPA attendees. Fill out your profile today! https://buff.ly/3FjkATu

Joining us in #StLouis for #ACPA22?! Check out our website for a great list of things to do, places to eat and local houses of worship. We've also compiled links to virtual tours of institutions in St. Louis! https://stlouis2022.myacpa.org/location/

Thank you so much @ACPA_CMM for this recognition and I can’t wait to be in community with y’all at #ACPA22 in St. Louis this March! @ACPA